Everything You Need to Know about Installing Fiber Optic Internet 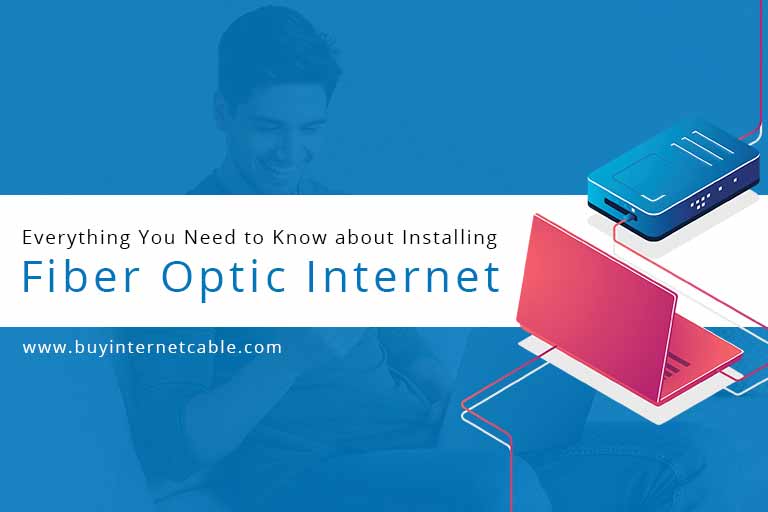 Fiber Optic Internet was a major milestone in the internet world. And now it has emerged as an essential part of the internet experience. These precious beams of light in massive fiber-optic cables have introduced us to a blazing-fast bandwidth. It’s hard for the users to settle for anything less now.

If you are still missing out on this super-fast service, then tag along to get acquainted with everything relevant to it.

How Does Fiber-Optic Internet Work?

Fiber-optic cables consist of thin fibers of plastic or glass. These fibers transmit data as pulses of light across extensive distances. Compared to the traditional metal wires, these glass fibers can transmit much more data. Moreover, they are resilient and immune to any electromagnetic interference. Another perk is that these wires are less prone to data loss.

Fiber-optic cables literally cross oceans and continents. And they do their job reliably even if they are at the bottom of the ocean!

The Impressive Mechanism of Tubes of Light

The achievement here is that the data literally moves at the speed of light. This means that tons of data can move real fast. Fiber optic cables have different types and features. Some travel long distances while others are more durable. However, both of them transfer data reliably and quickly.

FTTH or Fiber to the home ensures giving you the fastest and the most reliable connection. It’s a win-win because it saves ISPs money in the long wrong and they receive fewer service complaints from the customers.

As of now, the last mile of the fiber internet is filled by phone lines, coaxial cables, or wireless transmissions. Spectrum WiFi and other ISPs are already working on FTTH service as it also significantly reduces the maintenance budget. Moreover, still using these old technologies essentially become a bottleneck, lowering the speeds.

Some Features of Fiber Optic Internet

So, what makes fiber internet stand out? It is an innovative and cutting-edge technology along with some tangible benefits, which make all the difference. Let’s take a look.

Fiber connection speeds are not lofty in the advertisements only. These connections actually maintain these speeds and are much more reliable than most of the other internet types.

Moreover, most internet types are vulnerable to various types of interferences. Some instances are weather (satellite), congestion due to high traffic in the neighborhood (cable), and distance from the ISP’s central office (DSL).

Fiber Optic Internet doesn’t suffer from any of the aforementioned problems. It also doesn’t require much maintenance. since it’s the newest internet system, you won’t suffer from outages due to old cables and such similar woes.

Most fiber internet plans nowadays offer around a blazing 1 Gbps or 1,000 Mbps. This speed is more than most people can actually use even with multiple users with heavy internet usage in the house.

If you are thinking that cable internet plans also offer up to 1 Gbps, then know that the difference between the technologies is massive. How? Cable technology is pushing its limits to reach this massive bandwidth. Whereas, fiber technology is not even breaking a sweat as yet.

Soon enough, we will witness the gap between the fiber and cable technology getting wider. Spectrum internet plans offering a 2 Gbps fiber internet connection? Doesn’t sound like a far-fetched idea!

Cable internet services may advertise a similar downloading speed. However, when it comes to uploading speed, the story is not the same. Fiber internet offers symmetrical speeds, both uploading and downloading speeds in the true sense of the word. This means that you can download and upload both, at 1 Gbps.

Fiber is the best and more futuristic internet that you can get right now. Because it uses light instead of electricity, it uses high frequencies and loses significantly less energy while traveling over long distances. It carries more data farther than metal cables can.

Do you know that fiber-optic technology has been around since as early as the 1960s! However, installing it is still fairly expensive. The fair share of this cost comprises digging the trenches. However, in comparison, it still is okay because the connection will connect millions of potential customers.

Giants like Google Fiber are attempting to overcome these coverage cost issues by developing techniques like shallow trenching or micro-trenching.

Before you start dialing the customer support number of your ISP, take advantage of this self-installation guide. We’ll walk you through the steps for you to set up the fiber specialized equipment conveniently.

Most providers offer the self-installation option. Having a technician set up the whole thing for you can be expensive. The steps are somewhat similar to those required for installing other types of internet. But there are some major differences. Therefore, follow these steps:

Locate the Network Terminal of Your Fiber Internet

To install your own fiber-optic connection, you need to have an ONT or an optical network terminal in place. It is also known as a fiber jack or fiber network terminal. This terminal in the home essentially connects you to your internet provider’s network.

Phone jacks and coax jacks usually come as plates, which are installed flat against the house walls. unlike these, the fiber terminals are blockier and bigger. The range of sizes available is varied. From as small as a juice box to as big as a briefcase, they come in a variety of different sizes.

The bigger ones are meant to be installed in places, which are out of the way. Some instances are inside the closets, corner of a room, out in the garage, and so on. You can find and connect the fiber terminal yourself. However, if you don’t have a terminal, you will need the technician to pay a visit.

Connect the Fiber Terminal to Your Network Box

In case of dealing with larger terminals, you will need to ensure that the output of the terminal is wired throughout the house with one or more jacks. In this scenario, you will need to have a suitable Ethernet jack or a coax jack inside your house. Use them to connect the network box to the jack.

Plug Your Network Box In

Now that your network gateway or box is properly connected to your fiber optic internet terminal, follow these steps:

If you notice that the light is still not stable after 15 minutes, an easy hack would be unplugging and plugging it back again with a gap of 30 seconds. It should turn solid but if it still doesn’t, you need to contact your ISP’s customer support service to sort out the glitch for you.

Connect the Network Box with Your Device

To set up your Wi-Fi network, you will need to connect to your network box with one of your devices. It’s essential for the settings and all the tweaks. You can do it using a desktop, a laptop, a tablet, or even a smartphone.

Most of the network boxes can create a default wireless network automatically. The info about connecting to this default network can be easily found in the user manual. You can also find it on a sticker on the bottom or side of the network box.

Set up Your Home Wireless Network

Finally, we have reached the last step! In the case of having a default network. You can tweak the privacy settings and change the username and password. If your box doesn’t create a default wireless network during the setup, you will connect the Ethernet cable directly and then create a home Wi-Fi network.

But don’t worry, the process is as easy as setting up Spectrum Mobile. You will do it easily.