What Channel is AXS TV on Spectrum?

Home » Blog » FAQ » What Channel is AXS TV on Spectrum? 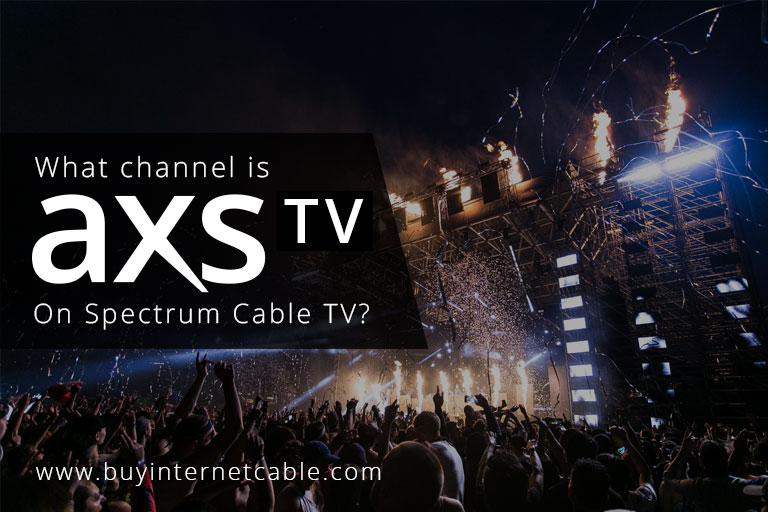 Music is a wonderful thing that has no language. It can heal people while bringing them closer. With the current epidemic still affecting everyday lives, music can certainly do wonders and can help a lot in this difficult time. It can maintain sanity while making your dull day a tad bit better. But from where one can get his/her daily dose of fresh music? The answer is AXS TV on Spectrum.

AXS TV is the ultimate channel for all music fans. Here, you can not only watch live music shows but can also enjoy some exclusive concerts. How cool is that?! You can see all of your favorite music artists as they bedazzle you with their mesmeric performances. Now you would not like to miss out on that, would you?

AXS TV is a specialty TV channel that is owned by Anthem Sports & Entertainment. Although the channel largely hosts music shows, you can also watch other entertainment content such as fighting sports. The channel was founded in 2001 and was named HDNet. Its primary focus was to air HD programming that included, combat sports, and of course, music. The channel was rebranded to AXS TV in 2012. Today you can expect to watch in-depth interviews of some of the music industry’s biggest stars on this channel. Moreover, the channel also airs documentaries and panel shows for your entertainment. You can even enjoy wrestling on this channel. People who are subscribed to Spectrum TV can enjoy all the exclusive content on this network.

Deals That Include AXS TV on Spectrum Cable

If you haven’t subscribed to Spectrum yet but planning to do so soon then you should note that AXS TV will not be available on Spectrum TV Select. Although this plan features 125 channels, the network is sadly not included in them. However, this channel is included in Spectrum TV Silver and Spectrum TV Gold packages. Both of these plans will bring tons of entertainment to your home. Before subscribing to any of the three deals, it is advised to call Spectrum and ask them about the availability of AXS TV in the package that you selected.

Since the channel list is so extensive, you might have trouble finding AXS TV on Spectrum. Therefore, to make your lives a bit easier, the following table would help you out in knowing where to find the channel.

If you are wondering what shows you will get to watch on AXS TV then brace yourselves! There is a ton of exciting programs that will satisfy your craving for quality entertainment content. Some of them are as follows

Famous Shows by the Network

#1. The Big Interview with Dan Rather

Dan Rather is a famous American journalist and news anchor. He with his years of experience in the field interviews the biggest stars on the planet from Ringo Starr of The Beatles to Robert Plant of Led Zeppelin in his show called The Big Interview with Dan Rather. The newsman gets up close and personal with the artists and makes them talk candidly about their past and future. If you love music, then this is one show that you need to watch!

When it is the Rock and Roll Hall of Famer Sammy Hagar taking you on a road trip, you know it is going to be an unforgettable ride. This music series will follow Hagar as he takes the viewers across the United States to meet some of the industry’s brightest stars. He takes viewers to their homes, talks candidly with them, and grants you a chance to know your idol better. At the end of the show, Hagar and his guests perform a jam session. You will also get to know more about Sammy Hagar himself.

Previously known as TNA iMPACT! this show is where the audience can watch some kickass wrestling matches. It will involve some intricate storylines, making the show even more intriguing to watch. You will get to experience some of the top names of the wrestling business such as Rhino, Rob Van Dam, Tessa Blanchard, and Taya Valkyrie locking horns inside the squared circle.

#4. The Day the Rock Star Died

This series focuses on the death and mourning of legendary musicians while exploring the events that led up to their demise. It also explores their legacy along with discussing their career highlights and what helped them reach the star status. The show has covered numerous stars so far such as Whitney Houston, Elvis Presley, Tom Petty, and Johnny Cash to name a few.

AXS TV is one channel that is dedicated to those who live and breathe music. And the fact you can find AXS TV on Spectrum makes it all the more special considering that you can get access to many more entertaining channels. However, if you really want to enhance your experience then having subscribed to one of the Spectrum internet plans is a must. It will allow you to enjoy your content seamlessly without any buffering.