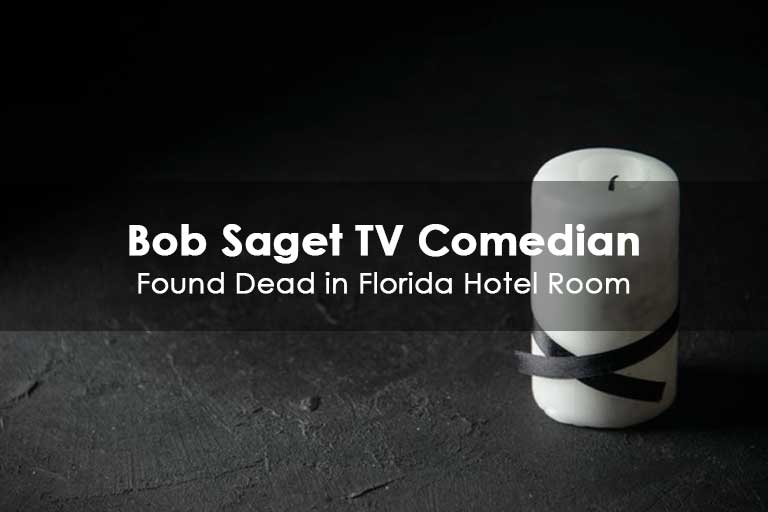 9/1/2022 – First responders to a call from a hotel in Orlando, Florida discovered one of the most tragic losses of the new year. Comedian, actor, and TV dad Bob Saget was found unresponsive in his hotel room at the Ritz-Carlton Orlando. In a few hours, condolences began pouring in, once the confirmation of Bob Saget’s death became official. Philadelphia-born Robert Lane Saget may not be instantly recognizable to young audiences. But the actor leaves behind a legacy spanning across TV, movie, and comedy entertainment. Tragically dead at 65, Saget’s most recognizable role will forever be TV dad Danny Tanner in the hit ABC sitcom Full House.

The actor had become less active on-screen over recent years. But with Bob Saget’s death, there is a void in the entertainment industry that will be felt for years to come. Here’s everything we know so far:

The public has acquired a morbid interest in celebrity deaths over recent years. Over the decades, we have lost a large number of celebrities to drug abuse, mental health problems, and even violence. Therefore, people often have a list of preconceptions when reading about a celebrity’s death. However, there is very little to indicate that drugs or foul play caused Bob Saget’s death.

The Orange County Sheriff’s Office confirmed Bob Saget’s death in his Ritz-Carlton hotel room. The cause of death is yet to be ascertained. However, the statement was quick to add that there seemed to be no visible evidence of an accidental/intentional drug overdose or other foul play. So as of the time of this writing, there is very little information other than that the Full House actor was found unresponsive in his Florida hotel room and his death was confirmed a few hours later. But there is a lot more to Bob Saget that people should be focusing on. Read on to learn more about the man behind Danny Tanner and other iconic roles.

Born in May 1956, Saget was one of the most versatile contributors to American entertainment. Originally starting in the stand-up comedy circuit, Bob was also a TV actor, and a TV host as well. Over the years, the actor built up a solid portfolio of hit shows and memorable roles, including:

While Saget’s initial foray into TV was a brief time on The Morning Program, his biggest claim to fame was by far the classic sitcom Full House. Saget played the role of Danny Tanner, a widowed father of three young girls. Airing from 1987 to 1995, Full House followed Tanner, his brother-in-law Jesse, and buddy Joey taking on the challenging task of raising 3 daughters. Following the lines of the hit-70s classic The Brady Bunch, Full House went on to be beloved across homes all over the country. From 1998 to its last air date, the show’s ratings remained in Neilsen’s Top 30 of the era.

Bob Saget’s second-best known role is on one of the best-known TV shows in the United States. The first aired episode was a TV special hosted by the actor. Saget went on to host the show for the next 7 seasons until his retirement in 1997. AFV (or AFV) was one of the first in the US to capitalize on user-generated content. And this is long before the internet was what it is today.

Relying on the popularity of camcorders in American homes, the show was able to source some of the funniest content ever caught on video. The strategy proved a success, the show is still running to this day, now in its 32nd season. Of course, Bob’s intensely funny commentary and hosting skills were a key ingredient in making it what it is.

In 2016, Bob Saget reprised his role as Danny Tanner in Fuller House. Sequel to Full House, the show followed daughters DJ and Stephanie. Now adult women with distinct lives, problems, and lifestyles, the sisters navigate life back in the Tanner home from the original show. Most of the cast (excluding the Olsen twins) reappeared and took on their old roles. That includes Bob’s reprisal of his best-known TV dad role – Danny Tanner.

How I Met Your Mother

You may not have seen Saget in How I Met Your Mother. But you must have heard him. Sharper viewers may have noticed how Ted Mosby sounds different on the show compared to when he narrates stuff. That’s because the Ted Mosby doing the narration was actually Bob Saget. The actor did not make appearances on-screen. But his voice made a lasting impact on the show in every episode.

HBO’s mega-show from the ‘noughties Entourage has had a large volume of fans and detractors. But there is no denying the star power the show had access to. Among heavyweights like Matt Damon, Mike Tyson, and many others, Saget played a parody version of himself on the show. Neurotic, petty, and at times abrasive, Saget appeared the complete opposite of the beloved Danny Tanner from Full House. But that is just a testament to his acting range.

Bob Saget’s Net Worth Shows a Rich and Fulfilled Life

The beloved actor had a career spanning 3 decades. In the entertainment business, 30 years is enough time for actors and celebrities to ruin their careers and financial health. But while Bob Saget may not have been the richest person on the Hollywood A-List, the actor had a fairly respectable career. At the time of his death, his net worth is an estimated $50 million. For a well-known actor with a defined niche, this is undoubtedly a very rare but welcome occurrence.

Sherri Kramer, Saget’s first wife, began dating him when she was 17 years old. The pair got married in 1982. The marriage lasted around 15 years, with the couple calling it quits in 1997. Saget remained single for several years, deciding to marry journalist Kelly Rizzo in 2018. The actor has 3 children, Aubrey, Jennifer, and Lara, much like his TV dad role Danny Tanner.

Saget was deeply involved in the Scleroderma Research Foundation. The reason for being so invested in this charity was deeply personal. Bob’s sister Gay fell victim to scleroderma and died in 1993. The actor’s directorial effort For Hope was based on the real trials and tribulations of his sister’s life.