DSL Vs Cable internet vs Fiber: What’s the Difference? 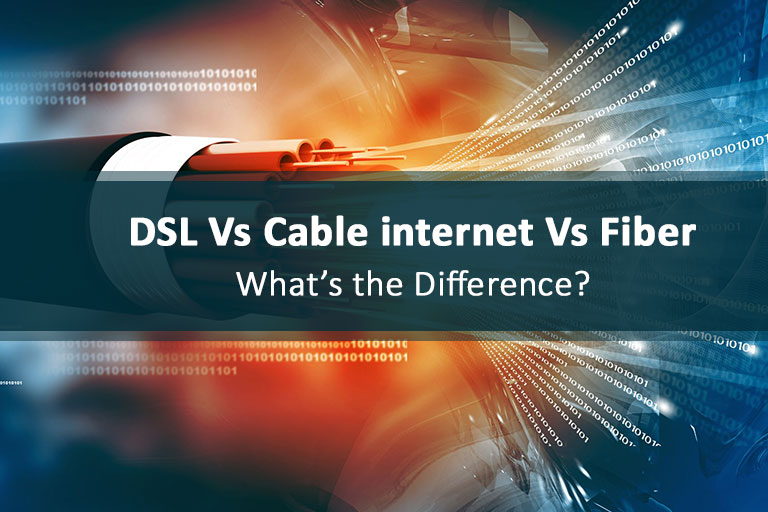 Internet and TV data reaches our home through Cable, DSL or Fiber technology depending upon the infrastructure available in our area. So, knowing about the merits and demerits of these technologies is important. Because it can help us in deciding which one should be installed in our homes for a high-speed Internet connection.

Before comparing the speeds and other features of these technologies, it is crucial to discuss their features.

It is the most famous technology in the world used for transmitting Internet signals. DSL is often bundled with a phone service installed in your home. These phone services usually offer a free DSL modem. However, you can also find other DSL modems in the market.

It is a much cheaper option than Fiber or Cable Internet. Below are some of the features of DSL Internet:

Cable TV providers usually provide this type of Internet. This isn’t a high-speed Internet option and speeds can fluctuate depending upon the usage by your neighbors who share the same connection. The speed provided by different operators can be different depending upon your area. Normally, the speed range is 10–500 Mbps for downloading and 5–50 Mbps for uploading.

Below are some features of cable Internet:

This is a relatively newer option as compared with Cable or DSL Internet. Providing Fiber Internet connection is a costly option therefore only well-established companies like Verizon FiOS and Google Fiber extra invest in this technology.

Although it is much more expensive than DSL and cable, it is also a more reliable option. It provides the same download and upload speeds. No matter how distant you are from the source, Fiber Internet makes sure to provide the same Internet speed. Some of the other features of Fiber Internet are:

The speeds provided by these three technologies vary widely. Among the three, the Internet speed provided by DSL doesn’t go beyond 35 Mbps. It is the slowest Internet option in the market. However, if you live in a remote area, this might be the only option for you. Cable Internet speeds can reach as high as 500 Mbps. However, the download and upload speeds are not the same. However, the winner is certainly Fiber because its Internet speeds can reach as high as 1000 Mbps. The upload and download speeds are comparable as well.

There are hardly any areas left in the world that don’t have phone infrastructures. Because these infrastructures are already in place, it makes DSL Internet easily accessible for everyone. Just like DSL, Cable is widely available. Although some rural areas don’t have these services available because of long distances. Fiber being a new technology is available in big cities only. Therefore, it is not easily accessible.

Because DSL connects from provider to consumer directly, the Internet connection provided by it is much more stable than the cable. However, as the distance of a DSL from the provider increases, the signals can become very unstable and poor in quality. Although the speed provided by the cable Internet is much higher, the connection can fluctuate a lot because of bandwidth sharing. On the other hand, Fiber Internet is the most stable source as compared with the other two technologies. Just like DSL, it also connects from provider to consumer directly.

DSL Internet is the most affordable option of the three. Because of the installed infrastructure, you simply have to get a cable connection to access the Internet. The cable option, on the other hand, is not cheap if it is installed separately. However, if it is coupled with other services like Voice or TV, then it can be quite affordable. Fiber Internet is not easy to install in the first place. The technology is quite complicated and costly. Therefore, it is a much more expensive option than the other two.

DSL Internet can be very unreliable in case of natural calamities like storms. Both your phone and the Internet services can die down quickly in such a scenario. Cable Internet is more reliable than the former one. Bad weather conditions usually don’t cause a disturbance in its service provision.  Fiber Internet is the most reliable option of the three. This is because it stays uninterrupted by electromagnetic interference. Therefore, the Internet connection remains steady and fast-paced during bad weather conditions.

DSL Internet usually is set up easily on a contractual basis. These can be long and frustrating at times. Plus, if the service is not up to the mark, you still have to adhere to the contract till the end of the year. Cable Internet can be subscribed on a monthly basis. Therefore, if you are dissatisfied with the service, you can simply terminate it at the end of the month. Fiber Internet is also subscribed on a monthly basis and you can unsubscribe to service anytime you want. So, the latter two services surely have an edge over the former one in terms of user-friendliness.

A Quick Comparison of All Three!

Feeling flustered or confused? Or maybe the information is too comprehensive to take in? Don’t worry! Here’ s a quick recap of all the points discussed above:

Which Technology Is Best for You?

This question is pretty common and the most worrisome for many people. It needs a bit of explaining so you could understand and then decide. Location is important; If you live in a remote area, DSL may be the best option for you. After all, the speed offered by satellite Internet is not as high as DSL. And other services like Cable and Fiber Internet might not be available in that area.

If you don’t have the fiber option in your area, it is better to opt for cable Internet. Or if you are a regular subscriber of your local cable TV service, it is a cost-effective option to bundle the two services together. Many companies like Charter Spectrum allow the user to bundle one of the Spectrum Internet plans and TV services together. For those who are hardcore gamers or are into video streaming, going with the fiber option would be best. That is if, you have that option available where you live.

If you have all the three options available in your area, it can get very confusing to choose between them. After all, each one has its pros and cons. Here’s a price chart of Cable internet services of a famous provider to make things a bit clearer and easier for you:

So, Which Type of Internet is the Winner?

In terms of speed, availability and range extra, fiber Internet is the most obvious winner. However, it is not available on the same scale as DSL or Cable Internet are. But the future is very promising for technologies like fiber Internet and low Earth orbit satellites. As the technologies are continuously getting bigger and better, fiber Internet will surely be the most popular connection one day.

What if you didn’t have any of these services in your area! Well, many other new technologies would solve the problem for you. You have to be patient though! Although these may be costly, the Internet services provided by these will be of high-speed and quite reliable. So, stay tuned for low Earth orbit satellites and other futuristic technologies that will be transforming the world soon.

Hope this clears some confusion and helps you opt for services that suit both your budget and Internet needs. Stay tuned for more about exciting new Internet technologies next!