How to Play a Winning Fantasy Football NFL Match? 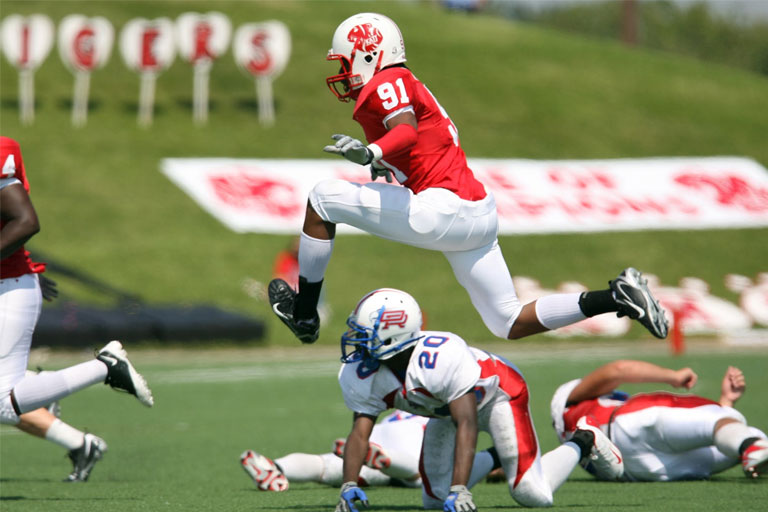 Fantasy football is part of American culture. It lets us nerds experience the excitement that comes off the game, although in a roundabout way. If you’re reading this, you probably got into fantasy football NFL recently, maybe even at the start of the year. Of course, you could be a player with a bit more experience, looking for a few helpful pointers.

In either case, this walkthrough should help you improve your playing significantly. Let’s get started with this guide on how to play a winning game.

What Is Fantasy Football NFL and How to Play It?

The fantasy version of the NFL is a math-based game. This math, in turn, depends on real-life NFL players. First, you draft a fantasy team of 15 real-life NFL players. Every week, you fill out a “starting” roster for players at the different positions your league rules allow. Usually, you get to select 1 defense (D/ST), 2 running backs (RB), 1 quarterback (QB), and 1 kicker (K). You also have 1 tight end (TE) and 1 FLEX as well as 2 wide receivers (WR). The accumulated statistics of your starting players on the field in real life for the week contribute to their total points.

These points of all your starting players tally up into your weekly score. If you score more than your opponent, you win that week. Repeat for 13 or 14 weeks, depending on your league. Simple? Not entirely. But let’s try to break down the technicalities for you in:

For new players, these areas can be tricky. But hopefully, this blog will help walk you through them.

So you now know the basics of your first fantasy football games. But that’s not going to get you very far on its own. Here’s what you need to know in order to manage your team for 13-14 weeks of fantasy football. Let’s say there is a playoff game scheduled on the Thursday of Week 1.

This means you need to fix your starting lineup 5 minutes before the game kicks off. If you don’t do this, any players from the playing teams on your roster are locked in. This means you may end up with several key players on the “bench.” Players stay locked in on the “field” and “bench” until the rest of the games for that week. Every week with Thursday Night Football will follow the same pattern.

Tip: Keep an eye on the game schedule and your starting lineup every Thursday.

On weeks without Thursday Night Football, you can tweak your lineup until Sunday. Sunday Night Football means you need to check your starting lineup once again 5 minutes before kickoff. But don’t get complacent in the free time that you have. Use it to catch updates on fantasy football on ESPN. Follow analysis, strategies, and injuries. Keep tweaking your lineup as the week’s progress.

So you managed to secure a win in Week 1. Good job! But even if you didn’t, Week 2 is where things start getting crucial. The waiver wire lets you acquire new players for your roster. Of course, you can only pick players that aren’t on any other roster in your league. You can put a claim on such players, based on your priority. Your priority is the inverse of the league standings, so lower scoring teams have a higher priority claim. You can also pick players nobody else has a claim on. But fantasy football rosters have limited space, so you’ll need to drop players to add players.

Strategize how you use your priority claim. Be careful not to spend it on a random player too early in the season. Wait for a few weeks or until you have an injury on your fantasy team. Of course, if you get the chance to pick a decent starter, go for it before someone else does. Most standard leagues accept waiver claims on Tuesdays and award players on Wednesdays. You can add or drop players throughout the week if some of your players are injured or missing the next game.

There’s only one way to add players to your roster other than the waiver wire. Most leagues allow a window for you to trade players with other owners in the league. Trades aren’t always about a single player. Often, you may need to trade multiple players. You may even be ready to give up a few players for a bona fide elite player. There’s no cut-and-dried method for fantasy trades. Patience, time, and a little luck can go a long way. A small player knowledge can always come in handy. Just be sure to execute your trade before your league’s trade deadline.

NFL teams have bye weeks during the season to rest and recover for the next match. Fantasy team owners will do well to keep an eye on the bye weeks schedule for different teams. You need to do this to make sure you have a full starting lineup every week. Otherwise, your players on a bye week will not score if they are locked into your starting lineup. Keep an eye on fantasy football news at all times.

Tip: Be the early bird when you need to add a replacement for an upcoming bye week.

Make sure you can find a replacement on the waiver wire when some of your players will be on a bye-week break. Adding a player from the fence before your starting player goes on a bye week is a good idea.

What is fantasy football?

Fantasy football is a math-based game that focuses on the performance of real-life NFL players on the field. Each player accumulates points during the week, which make up your weekly score. Score higher than your opponent to win.

How to play Fantasy Football games?

You draft a team of 15 players from the actual NFL roster. Then you select nine starting players each week. How these payers perform on the field in real-life determines the points these players earn. These accumulated points make up your score. You win if you score higher than your opponent.

How to win Fantasy Football league if you are a beginner?

Winning fantasy football is not an exact science. It takes a combination of time, patience, and luck. You can reduce your chances of losing by keeping yourself up-to-date on the happenings in the NFL.

What is the best place to play fantasy football for money?

Yahoo!, My Fantasy League, ESPN, CBS, NFL, and Fan Duel are some of the best places to play for money.
Disclaimer: Although all requisite efforts have been made to procure owner/publisher approval for the images used in BuyInternetCable.com Blog posts, we apologize (in advance) for any unintended and/or uninformed copyright violations still incurred therein. If you feel that your material has been used without your tacit consent, please feel free to correspond with us through Contact Us page.
error: Content is protected !!