Most Popular Reality TV Shows in the U.S. By State

Home » Blog » Entertainment » Most Popular Reality TV Shows in the U.S. By State 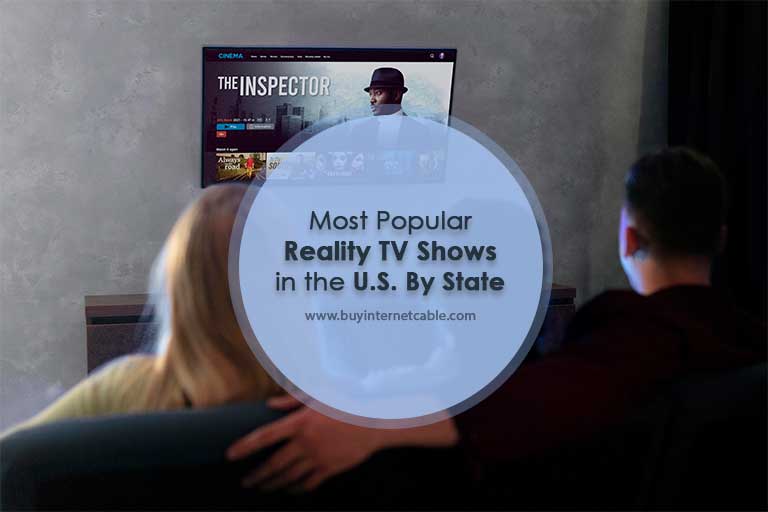 American households love a good reality TV show. In recent times, shows like The Bachelor, Too Hot to Handle, and Survivor have been some of the top favorites. But more reality TV shows keep entering the mix and taking the top spots. From reality shows based on survival to dating, there is something for everyone. In 2021, we said goodbye to classic cult favorites like Keeping Up with the Kardashians and welcomed new ones like Baking Impossible. All in all, it has been a good year for reality show lovers across all 50 states.

The Popularity of Reality TV Shows According to Google Trends

It is a common practice for most people to Google their favorite shows. You might need information on the cast, the release date, etc. So, this blog compiles data from Google Trends. It relies on the number of times a show was searched for in any particular American state. So, RuPaul’s Drag Race might be the top hit for reality TV shows 2021 in Hawaii. But it might not be as popular in Texas.

It can be easy to find which reality show people searched for the more. Google Trends can separate a number of searches by location and state. So, a list of all the States where your keyword was searched for will appear on the right. Then, you can search for your favorite show and find out where it is most popular.

The general American trends can change by State. Whether we are talking about shows or politics, each state can have a different favorite. Here are some of the top reality TV shows in America by State.

Alabama was the first state to recognize Christmas as an official holiday. Contrary to popular belief, Christmas was not always this big in America and this only happened after 1836. Here is what people in Alabama like to watch:

Alaska is known for its mountain peaks. And it has 17 of the 20 highest mountains in North America. The top shows in Alaska are:

Arizona receives the most sun in all of America. In fact, Yuma, in the southwest, is the sunniest place on Earth. Top shows in the sunny state are:

Arkansas is the only US State that has an active diamond mine. So, most of the diamond production happens here. Here are the top shows in the State:

California is famous for the Golden Gate Bridge, Disneyland, and Hollywood. It is one of the most famous destinations in the world, teeming with celebrities and reality TV stars alike. Californians like to watch:

1: Keeping Up with the Kardashians

4: The Real Housewives of Orange County

Colorado has the world’s largest natural hot springs swimming pool. It is a popular tourist spot for people of all ages. The top shows are:

2: Tidying Up with Marie Kondo

It is known as the “Constitution State”, the “Nutmeg State”, the “Provisions State”, and the “Land of Steady Habits”. Famous shows are:

Delaware is the least populated and the first-ever state to join the Union. The most popular shows in Delaware are:

Florida is the flattest state in the USA and got its name from Spanish explorer Juan Ponce de León. He named it ‘La Florida’, meaning “land of flowers”. Famous shows are:

It is the birthplace of wine so Georgia knows how to have fun. Some of the most popular shows in the State are:

Hawaii is known for its Flaura and Fauna and fantastic beach resorts. The popular shows in the state are:

1: Too Hot to Handle

Idaho produces the most potatoes, trout fish, Austrian peas, and lentils. So, it is primarily an agricultural state. The most popular shows are:

2: Glow Up: Britain’s Next Make-Up Star

The first McDonald’s was built in Des Plaines, IL. Then on, it has been an international success story. People in Illinois like to watch:

2: Down to Earth with Zac Efron

The state colors are blue and gold and Indiana is the only state to have a chapel in the capital. They might take religion seriously but that’s also true for entertainment.

2: Keeping Up With the Kardashians

Iowa is the only state bordered by two rivers. One of them is the Missouri River and the other is the Mississippi River. Popular shows are:

Kansas is hit by many tornadoes every year. People also call it the ‘Tornado Alley’. The most popular reality TV shows in Kansas are:

If you think of Kentucky, you must think of fried chicken (KFC). Moreover, Kentucky was home to Abraham Lincoln and Jefferson Davis, two of the most important people in US History. Some of the most popular shows are:

Louisiana is famous for its unique Creole and Cajun culture, food, and the Mardi Gras festival. It is all about fun and games and the popular shows are:

2: The Real Housewives of Atlanta

Maine is pretty much all about food and the Maine lobster is makes up 90% of the country’s supply. They are also the largest blueberries produced in the country. They like to watch:

The U.S. National Anthem was written in Maryland. The State has a rich culture and history. It isn’t a surprise that Marylanders like to watch:

1: Down to Earth with Zac Efron

2: The Real Housewives of Atlanta

Cranberry is the state berry for Massachusetts. It is also sometimes called the Baked Bean State. Some of the most popular shows in the state are:

1: The Real Housewives of Orange County

Michigan is known for its longest freshwater shoreline. It stretches far out than any other state in the nation. The state’s most popular shows are:

Minnesota is home to the Twin Cities: Saint Paul and Minneapolis. It is known for its lakes and metropolitan cities alike. And the most popular TV shows are:

2: The World’s Most Extraordinary Homes

Mississippi has the lowest per capita income out of all American states. The local income makes up for the lowest per family average in the country. However, they watch some of the best reality TV shows and the most popular ones are:

Missouri is home to thousands of caves which gave it the name ‘Cave State’. The most popular shows are:

1: Down to Earth with Zac Efron

Montana is home to more elks, deers, and antelopes than humans. It is one of the most bizarre facts about the state. Some of the most popular TV shows are:

Kool-Aid is a cult classic and an American cultural icon. It was invented by Edward Perkins in Hastings, Nebraska. The most popular shows in the state are:

It is a famous saying that what happens in Vegas, stays in Vegas. The Nevada fun city has more hotel rooms than any other city on Earth. It is where Americans come to a party and the most popular shows are:

New Hampshire became the first state to declare its independence from England in 1775. The popular TV shows are:

2: Dancing with the Stars

3: The Real Housewives of Orange County

New Jersey is the diner capital of the USA. The diner culture is one of the most iconic things about the USA in general, and it all seems to have stemmed from NJ. The most popular TV shows are:

1: The Real Housewives of New Jersey

New Mexico is all about academia and over-achieving. So, it has more PhDs per capita than any other state. The most popular shows are:

NYC is the capital of the world and is one of the most popular cities in the world. It is known for its bagels, the central park, Katz’s Deli, and Times Square. Most of the TV shows and movies are based in or around New York as well but the most popular shows are:

The Wright brothers completed their first flight in North Carolina. So, it is the state where the airplane was born. The popular shows are:

The US can have the most bizarre laws sometimes. For example, in North Dakota, lying down and falling asleep with your shoes on is illegal. But they can still watch reality TV at least and some of the famous shows are:

1: Keeping Up with the Kardashians

Eight U.S. Presidents come from Ohio which is more than any other US state. The most popular TV shows in Ohio are:

Oklahoma has one of the largest population of Native Americans compared to other states. The most popular TV shows are:

OregonAccording to several historians, Oregon has over 200 ghost towns. They are towns that exist on maps of Oregon but are nowhere to be found in the real world.

4: The World’s Most Extraordinary Homes

The first baseball stadium was built in Pennsylvania in 1909. The town of Hershey is also popular for its chocolates. The popular shows are:

Rhode Island is the smallest state by area in the United States. Popular shows are:

Georgia peaches are common in pop culture references and talked about in literature, but South Carolina actually has more peaches. Popular shows are:

1: Tidying Up with Marie Kondo

In addition to Mount Rushmore, South Dakota is also home to the Crazy Horse Memorial Carving. It is still a work in progress and some say it might never get completed. But if it does, it will be the biggest stone statue in the world. South Dakota’s favorite shows are:

According to the Tennessee state encyclopedia, the Reelfoot Lake was created by a series of violent earthquakes. So, there is immense history in the state’s geography and topography as well. The popular TV shows are:

Texas is larger than any European country and is the second-most populous state in America. People in Texas like to watch:

Utah is the second-driest state in the United States after Nevada. It can get up to 300 sunny days in a year. Popular reality TV shows are:

It is the second smallest state by population (after Wyoming) and the biggest producer of maple syrup in the country. The shows popular in Vermont are:

3: The Great British Bake Off

The First Thanksgiving story that everyone hears happened in Virginia. From then onwards, it has become a national tradition and a holiday. The popular shows are:

The state of Washington is the only state in the country named after a President. It is popular because of the political buildings and the capital city Washington, DC. The most popular shows are:

West Virginia is known for its scenic mountain beauty and the great outdoors. You can have a lot of fun staying outdoors for some recreational activities. But people also stay in and watch their favorite TV shows like:

1: Tidying Up with Marie Kondo

Green Bay, Wisconsin is known as the “Toilet Paper Capital” of the world. You can imagine why on your own. Although the most popular TV shows are:

Wyoming is the smallest state in the USA in terms of population. The shows they like to watch are:

So, here is an extensive list of reality TV shows in 2021 that were popular in all US states. The shows are some of the most searched for and watched around the country. Whether you like cooking shows, travel, adventure, or relationships, you might find your favorite show on there too. These popularity stats are entirely based on Google Trends and search volumes around a keyword. So, there is a margin of error in the list and they are not facts.