What is Satellite Internet? Advantages and Disadvantages

Home » Blog » Tips » What is Satellite Internet? Advantages and Disadvantages 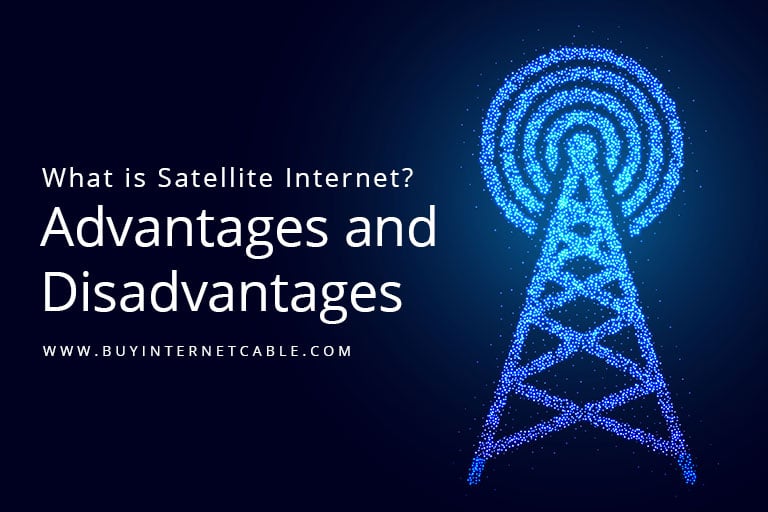 If you live in a remote area and do not have access to cable or DSL internet satellite internet comes in quite handy.  In an area where the only option is dial-up internet, it can serve as a significant upgrade. Terrestrial networks, however, provide significantly better speeds, data caps, and pricing options.

Continue reading below to find out more about it. We will also discuss the advantages and disadvantages of such a connection.

What is Satellite Internet?

Simply put, a service provider provides this type of internet over a communication satellite. Traditionally, such a type of internet connection comes with latency issues, lesser bandwidth, and limited data caps. Now, with the help of geostationary satellites, this is gradually changing. Service providers are working extensively to minimize latency issues by launching satellites in low-earth orbits. Regardless, such a connection is extremely viable for remote areas where terrestrial internet connections are not available. If you are thinking of opting for it, you will need to know about its advantages and disadvantages.

There are many advantages of a satellite-based internet connection. Here are a few of them:

Perhaps, the greatest advantage that a satellite service provider offers is global coverage. Even a single satellite can suffice in providing internet services over an entire continent. This enables users to at least have an uninterrupted and constant internet supply. No geographical obstacles can hinder the transmission of a satellite connection.

Compared to dial-up connections, a satellite connection is faster. Depending on your package, you can enjoy exponentially higher internet speeds. In comparison with DSL or ethernet connections, these speeds will be lower. Yet, they will be good enough to provide you a good enough internet service.

For service providers, it is quite a costly job to set up an internet service functioning on optic fiber. Furthermore, such a service is quite expensive for consumers as well. Satellite internet, on the other hand, once set up can ensure internet coverage virtually everywhere on the planet. The packages are also economical in comparison.

You can easily deploy satellite antennas to start surfing the internet. At most, the entire process will take a few hours. If you’re using the service on a handheld Wi-Fi device such as a smartphone, you can connect to the internet in no time at all. If you are connecting to the satellite for the first time, it’ll take you just a few minutes to set the device up for connectivity.

Wi-Fi and MiFi users alike face internet connectivity issues. The most common reasons are network outages and high internet traffic. In stark comparison, a satellite connection may seldom face downtime. This is due to the lesser amount of traffic and independence from terrestrial infrastructure.

Although users of a satellite-based internet connection will experience an uninterrupted supply of internet, they will encounter latency issues at times. This is due to the vast distance that the information has to travel to and back from. Note that the data has to travel from your device into space to the satellite. This process takes time. If you are into gaming then make sure to subscribe to a DSL or ethernet-based service provider.

The data caps are quite restricting. At max, you can subscribe to around 150 GB of fair usage. This means that you cannot do a lot of streaming over such internet connections. However, if you’re moderate and disciplined, you may still find such an offering acceptable. With that said, it is still advisable to subscribe to a good TV package such as Spectrum TV Silver so that you can watch your favorite shows easily. Most packages have a data limit of around 50 GB per month.

In extreme weather conditions, the signals traveling to the satellite can suffer. Furthermore, the equipment at home can get damaged easily. Strong wind and rain storms can damage the dish easily. Make sure to provide it ample protection. The weather effects on the internet based on the satellite are undeniable. You have to take the necessary steps to ensure smooth transmission.

To set up a satellite internet connection you don’t have to pay much. However, the service in itself is quite expensive. For even the most modest of speeds, you will have to pay around $100 per month. In comparison, cable internet is much economical.

Since, data from your computer has to travel a very long distance into space and back, even the most minor obstructions can affect the signal strength. Make sure that if you’re living in a remote area that you cut down nearby trees to increase signal efficiency. Strongly blowing wind also poses a major threat in remote areas to the dish.

Do note that VPNs are incompatible with a satellite-based internet service. For VPNs, users need high-quality internet that provides fast download and upload speeds. They also require low latencies and high bandwidth speeds. So, if you need a VPN for certain business reasons then you need to subscribe to a traditional ISP.

There is no doubt that satellite internet is a great way to get access to the internet. Especially if you live in a remote area like a rural area or countryside where there is no DSL or ethernet-based connection available. With that said, there are a few precautions that you must take such as removing hindrances nearby for smooth transmission. Make sure to take care of such things. Once done, you’ll be all set to access the web once again.

You will never hear of a Spectrum internet outage or a good ISP failing to provide smooth internet in the metropolitan area. Therefore, it is wise to subscribe to the internet from such ISPs if they are offering their services in your area. If they aren’t, then sure a satellite-based internet is the better choice as compared to a legacy dialup connection!

Why Charter Cable Internet is better than Satellite Internet?

Spectrum cable internet is more reliable than satellite Internet because service is delivered through a physical wire rather than a signal.