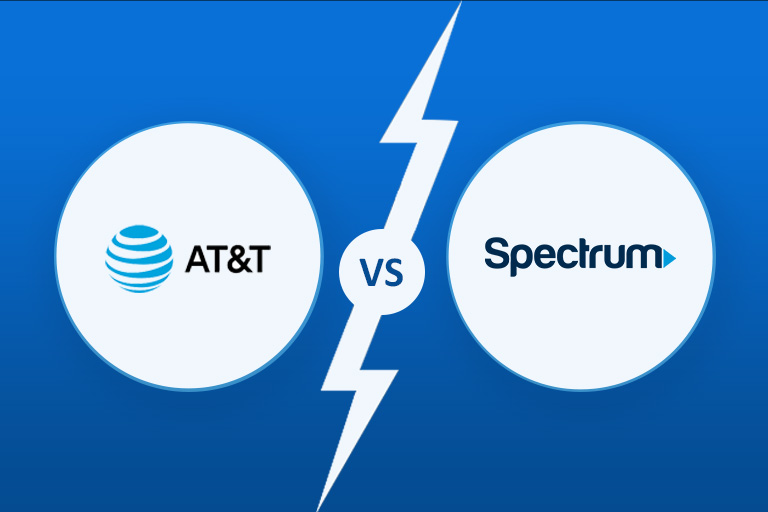 AT&T and Spectrum are renowned names in the Internet and cable TV industry. Charter Spectrum serves millions of customers across 43 states whereas AT&T is the largest telecom company in the entire world, offering its Internet plans in all 50 states.

Since the two of them are the leading providers, so many people are wondering which one’s best or better. Let’s walk you through this Spectrum Vs AT&T comparison to find that out.

The main difference between Spectrum and AT&T both offer commendable services and plans. Both offer gigabit Internet plans with 940 Mbps speed and above however, AT&T’s service is available in more cities.

Spectrum’s basic Internet plan starts with 100 Mbps download speed and it’s widely available in most areas. It’s an excellent package for most homes. AT&T offers two types of Internet services – AT&T internet And Fiber. The former is a DSL hybrid and it doesn’t really top the 100 Mbps speed provided by Charter.

Charter’s Internet is delivered over a cable network. As stated earlier, AT&T features DSL and fiber optic plans. The Internet plans of both providers differ based on availability, pricing, and speed.

These are the Internet Plans offered by the provider:

When prices are compared, AT&T Internet plans are cheaper. To get the lowest price, you will have to bundle the services though. However, bundling the services doesn’t lower the price of the Charter’s Internet plan.

If you wish to subscribe to an Internet-only plan, Charter offers a good bargain with decent speed. For anyone who needs 1000 Mbps of download speed, settling for an AT&T Gig Internet plan is the right thing to do because of not just the price but the availability of the plan. You can also Enjoy Spectrum WiFi services.

Renting equipment with AT&T requires paying a monthly fee whereas Spectrum doesn’t cost extra for that. Rather, it offers a FREE modem with all its Internet plans.

Spectrum’s lowest speed (Internet Assist 30 Mbps) is faster than that of AT&T (Internet 25 with 25 Mbps). AT&T’s fastest speed plans are available in more locations than Spectrum’s.

In short, both providers have Internet speeds for all types of users. One has to figure out what speed they would like to settle for. This could be a turnoff but AT&T applies 1 TB data caps on most Internet plans. Charter doesn’t. All their plans have unlimited data. This means you can continue streaming, playing HD games, and enjoying other online activities without worrying about losing speed.

AT&T doesn’t have a contract. But there is an early termination fee of up to $180 if you cancel a new service after 30 days.

Spectrum’s Internet plans are offered month to month. Subscribers can cancel at any time without worrying about the penalty. The provider also has a $500 contract buyout offer from your previous provider.

Here’s a quick comparison of the primary TV services of both providers:

Check out the provider’s three TV plans and their pricing:

AT&T TV plans feature Live TV and on-demand. Its entertainment package features 65+ channels, 3 months of Showtime, STARZ, and EPIX and, of course, top channels like HGTV, TNT, ESPN, and others. The choice package is one of their best-selling packages. It features 90+ channels which also includes regional sports networks. Apart from 3 months of Showtime, Cinemax, STARZ, and EPIX, you would also get 12 months of HBO.

The Xtra package is the ultimate heaven for sports lovers. It features 120+ channels offering everything from Choice including 20+ channels such as National geographic wild, Gold, LMN, and others.  It also comes with 12 months of HBO, and 3 months of STARZ, Showtime, Cinemax, and EXPIX.

Both providers let you bundle TV and Internet services. You can also add voice service for a complete home entertainment package and save money. These are the most affordable bundles by both providers:

AT&T has a better customer satisfaction rate than Spectrum. The main reason for the low score was the merger between Time Warner Cable and Bright House Network customers which lead to many billing disputes. However, their installation and modem support services are top-notch.

Which One Takes the Lead?

There’s no winner in the Spectrum Vs ATT debate because both offer similar services to some extent. AT&T is best for high-speed connections and variety in cable TV channels. Spectrum, on the other hand, is admirable for unlimited data, affordable TV cable plans, and no contracts. Choose whatever provider you like depending on your taste, budget, and needs. Some plans might not be available in your zip code. To confirm that by calling the Customer Support provider.

Check out some frequently asked questions about both services:

Is AT&T or Spectrum Internet Faster?

Spectrum Internet is typically faster as compared to AT&Ts DSL plans. However, if you would like ultimate speed, settle for AT&T fiber plans.

Is Spectrum cheaper than AT&T?

Spectrum’s plan to plan service is cheaper than AT&Ts. However, AT&T’s bundle offers to provide better savings than the Charter. To find a good and affordable deal, make a decision based on your preferences and budget.