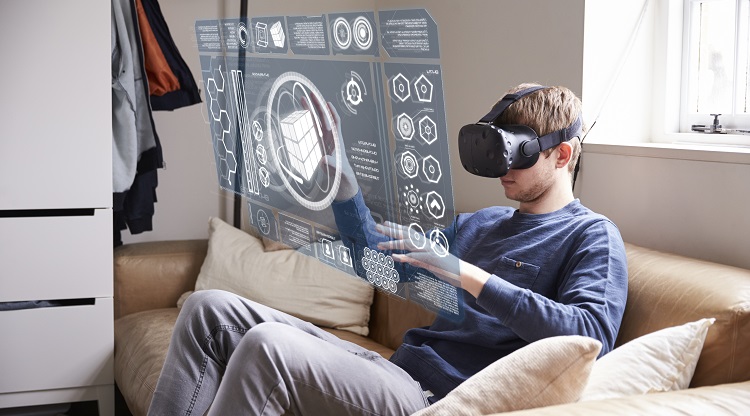 As we are about to say goodbye to the first decade of the 21st Century, it is only fitting that we discuss some of the most important technological developments of our time. For some people, machine learning and artificial intelligence are huge. For others, the Internet of Things or IoT is even bigger. Moreover, some think that the biggest technological feat of this decade is AR and VR. The AR and VR trend 2022 has changed a lot about training, business, and gaming. And we might see AR gadgets everywhere within the next few years.

What Is Augmented Reality (AR)?

AR is a technology that can superimpose a virtual image from the computer to the user’s real-life surroundings. So, if you have an AR set, you can feel like you are playing with a ball even when you are in your room. The environment around you can feel quite real. And that is why its professional uses can include different types of simulations.

You might already be using AR in your smartphones such as Snapchat or Instagram filters. Moreover, there are apps that help you try-out clothes or a new haircut through AR. The world might see 6G technology soon and that is when AR could shine through. You could virtually put yourself in any situation right from the comfort of your home.

How Does Virtual Reality (VR) Work?

As the name suggests, the virtual reality environment is completely digital and made-up. While you can augment an addition into your real-life surroundings with AR, VR is completely an illusion. So, you can feel like you are in outer space or the top of a mountain. But in reality, you could be at your office desk. So, there are no parts of the real world in the simulation that you are experiencing with VR.

The main difference between AR and VR could be the equipment that you need for each. The goggles, VR/AR sets, and other equipment can be completely different and usually isn’t interchangeable. Moreover, AR users can control their own movements but the system controls VR. So, you might be wondering if AR is better than VR or vice versa. To understand both concepts, we’d have to take a look at their pros and cons.

Augmented reality has a wide variety of practical applications and advantages. We can use AR in medicine, the military, gaming, and so much more. Now, even FIFA uses the technology for goal-line and offside calls.

Here are some of the pros:

While AR is a huge leap forward in technology, it comes with its fair share of drawbacks as well. Here are some of them:

The Pros of VR

Virtual Reality can help us simulate complete illusions. So, we can stretch the possibilities by a fair margin. Here are some of the most apparent pros of using VR technology:

The Cons of Virtual Reality

No technology can give you everything and not have some disadvantages. Because nothing in this world is perfect. So, here is why VR isn’t all rainbows and butterflies:

VR training rooms can help but cannot exactly replicate real-life situations. A great example of this could be the case of pilot Captain Sully. He landed his aircraft in the Hudson Valley in an emergency situation. The VR tech in his inquiry hearing claimed that a landing was possible at the nearest runway. But later on, a response time delay was added to the simulation that proved it was humanly impossible to do so.

Back when AR and VR first hit the commercial scene, they were novelties. Of course, technology was revolutionary. But people couldn’t seem to move beyond Snapchat filters and basic VR games. However, the market soon began to evolve and improve on existing AR and VR technology. In a world where net neutrality is under siege, tech leaders have invested efforts to create better ways for people to interact with technology and each other.

AR and VR technologies became immensely popular during the last half of the decade. Popular games like Pokémon Go gave a whole new meaning to augmented reality as entertainment. At the same time, technology like Oculus Rift (now owned by Facebook) and PlayStation VR emerged, kickstarting the current augmented reality trends 2022. Today, there are several real-world use cases for AR and VR, with more on the way. So, without further ado, let’s take a close look at the 5 biggest and most important trends in virtual reality and augmented reality technology:

One of the most important and effective uses of virtual reality and augmented reality is in training. Consider high-risk jobs like being a surgeon, an airline pilot, or manning sophisticated military equipment. In all of these jobs and many others like them, the margin for error is extremely low. That means any error could potentially have disastrous outcomes, even leading to the loss of lives. The problem is, unless these people get the right experience, they won’t be able to become effective professionals.

AR and VR trend 2022 offer a unique alternative solution. Instead of having your medical interns operate on actual patients, you can first train them in VR or AR. That way, even if they do make an error, nobody gets hurt, and they still get to learn and gain experience. The same applies to training fighter pilots or commercial pilots. An inexperienced pilot could easily crash an aircraft, potentially killing passengers and causing property damage. But if a pilot can learn how to fly specific aircraft using AR and VR, the risk of pilot error goes down. The United States Air Force is leading the VR training charge.

Another major trend we’re seeing is a shift towards using AR and VR technology to offer remote assistance. This is potentially a game-changer. Take this for example. You break down during a road trip in the middle of nowhere, without access to AAA. Normally, you’d have to hike miles to the nearest gas station or mechanic and get your car towed and fixed. But with software like TeamViewer, you don’t have to go anywhere for assistance.

Software such as this makes use of your smartphone’s camera as an eye. That way, the person on the other end offering remote assistance can see what you’re seeing. But what’s really exciting is that the person can place AR markers for you on your car, say in the engine bay. These markers point out areas you need to pay attention to, helping you get your car running without needing to find a mechanic.

Professional gamers have fast internet speed for gaming and specialized PCs. Of course, something as novel as VR and AR was always going to make its way into gaming. Pokémon Go is perhaps the biggest example of early AR games. But that was just the beginning. With sophisticated VR technology and better, more powerful processors, there are more serious gaming applications than a smartphone game.

VR gaming has already started to make waves within the industry. Popular platforms like Steam, Sony PlayStation, and even Oculus Rift have come out with much more advanced VR games. With advanced virtual reality trends 2022, the new games include Samurai Slaughter House, Zenith, and The Last Worker. With gaming studios working on even more sophisticated VR technology, the gaming industry is preparing itself for a huge transition. While the primary purpose is still entertainment. VR gaming is much more immersive than PC, console, or even smartphone games.

#4: An E-Commerce Revolution in the Making

One of the industries that VR has had the biggest impact on is the retail industry. The largest e-commerce stores like Amazon and Alibaba are already working on leveraging VR to generate more traffic, more sales, and better customer experience.

Consider Buy+, Alibaba’s VR store. The Chinese e-commerce giant unveiled the world’s largest VR mall in October 2016. The app got over 8 million downloads just in its first week. Amazon soon followed in Alibaba’s footsteps and opened “Experience Kiosks” all over India on Prime Day. While VR shopping remains a niche market, it is obvious that the biggest e-commerce players have it under consideration.

IoT devices may still be a novel concept, as is the concept of the smart home. But in industrial settings, IoT devices and immersive technologies like virtual reality and augmented reality have very real applications.