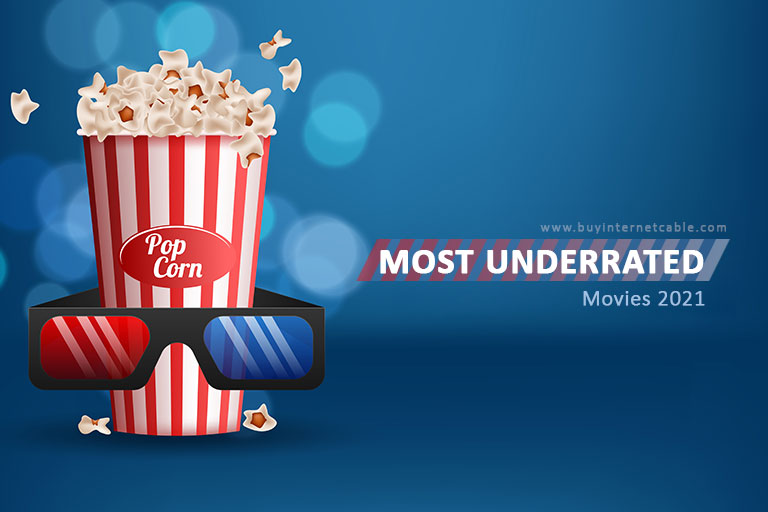 There is a lot of original film content churned out every year. From Hollywood blockbusters to indie movies and foreign language films, there are many flavors of entertainment to choose from. However, just because there are more new films to watch each year, you aren’t guaranteed quality every time. There are good films, and there are horrible ones. Somewhere between the two extremes are the films that slipped below the radar but are actually great. Here are some of the most underrated movies of 2021 that you should not put off any longer! These are a treat for movie enthusiasts everywhere.

If you are a cinephile, you probably have a very high standard to judge any film against. For the more casual among us, IMDb and Rotten Tomatoes are common ways to judge the worthiness of a film before watching it. And of course, there are teasers, trailers, PR events, and good old word-of-mouth that help generate hype for movies.

However, despite the hype, many movies turn out to be fairly poor. By the same measure, there are many great films out there that never got the hype they deserved. Each year, some of these films get overshadowed by big studio releases or resistance to foreign language films. But they still offer an entertainment experience with more depth than many contemporary releases. Here are 10 underrated movies from 2021 that you may have missed:

To be fair, this doesn’t count as underrated. At least not in the conventional sense. Leo DiCaprio, Cate Blanchett, Jennifer Lawrence, and Ariana Grande are easily recognizable faces on this 2021 release. But Don’t Look Up is as much a testament to Adam McKay’s satirical ability as it is to his casting ability. The plot revolves around two down-and-out astronomers who accidentally discover a comet heading straight at Earth.

Obviously, celestial bodies and imminent extinction looming over humanity are a fairly old trope in Hollywood. However, Don’t Look Up diverges from films like 1998’s Armageddon or Deep Impact. There are no hastily assembled teams of “astrocivilians” scrambling to destroy a meteor. Instead, the fast-paced film takes snipes at political and social apathy, even in the face of extinction. Don’t Look Up is somewhere between a VEEP episode and an SNL sketch. But there is no denying the depth it touches in terms of where our world has become. Doing nothing in the face of a calamity does seem on-brand for governments, doesn’t it?

Before there was a Star Wars, there was Dune. Frank Herbert authored the first book in 1965. And from there, the series blazed a trail for a new era in science fiction. Dune and its 5 sequels are some of the most influential sci-fi books ever written. Denis Villeneuve’s big-screen adaptation of the same name came out in 2021, and many would include it among the most underrated.


Dune follows protagonist Paul Atreides (Timothee Chalamet), a young man with intense talents and an inescapable destiny. The movie follows Paul as he travels to the most notorious place in the whole universe to offer his family and his people a chance to survive. With violent and deep-rooted conflicts brewing, a cruel monopoly over resources, and brilliant character development, Dune should be on your watchlist for this weekend!

The Power of The Dog has a decidedly Wild West setting. But it is not a spaghetti Western at all. The psychological drama starring Benedict Cumberbatch and with Jane Campion at the helm is a period piece of epic proportions. It is the story of two brothers, a slow burn about sibling rivalry, clashing personalities, dysfunction, and desire.

The Power of the Dog Official Trailer

The Power of The Dog is undoubtedly one of the overlooked movies in the past year. Critics and viewers have nothing but rave reviews for the deep-rooted psychological drama. Many herald it as a long-awaited female perspective on machismo and hyper-masculinity in the Wild West.

#4. Summer of Soul (…or, When the Revolution Could Not Be Televised)

Imagine a festival with greats like Stevie Wonder, Nina Simone, Blinky Williams, and The 5th Dimension. If it were happening today, half the world would be in attendance, with the other half attending via a virtual watch party. Now imagine the festival somehow relegated to obscurity. Sounds impossible, doesn’t it? But it actually happened.

Summer of Soul (…or, When the Revolution Could Not Be Televised) is a documentary on the Harlem Cultural Festival in 1969. Or, more specifically, why it never received the recognition it deserved. The documentary contains restored footage that comes from over 40 hours of recordings. Surprisingly, only 2 one-hour segments of the footage aired on national TV. Since then, for nearly 50 years, the footage languished in basement storage somewhere. The documentary offers a never-seen-before look at culture and music in 1960s Harlem and asks some very poignant questions.

#5. Judas and the Black Messiah

Judas and the Black Messiah is arguably one of the most criminally underrated movies in 2021. The historical biopic goes above and beyond to avoid dramatizing events and conventional tropes that gloss over the ugliest bits of history. It is also a piercing look at events surrounding the Civil Rights Movement.

The film focuses on a very specific part of the Civil Rights Movement and Afro-American history. Namely around the Black Panther Party and its revolutionary leader Fred Hampton. More specifically, around the events that led to his betrayal and assassination. The film touches deeply on sensitive social issues that continue to cause problems decades later.

The tragic story of Princess Diana, mother to princes William and Harry, and wife to Prince Charles is something everybody has heard about. Spencer, however, does not shy away from its own take on the controversy that gripped most of the world. The film picks up at a stage where Charles (Jack Farthing) and Diana (Kristen Stewart) have long since accepted their marriage has failed.

However, unlike most other biopics covering the strained Royal marriage, Spencer steers clear of the typical sensationalism. Dodi Fayed, the infamous car crash, and the global shock at Princess Diana’s demise. None of these events feature in the film. What it does focus on is an incredibly raw look at a fraying marriage, the incredible pressures of public life as a Royal, and the obstacles in one woman’s quest to forge her own path.

Where Can You Watch These?

By now, you’re probably itching to start watching these movies. But where do you watch them? If you cant find them on any of your regular TV channels, that’s because some may be exclusive to certain streaming platforms like Netflix or the Spectrum TV App.

Remember, you should always opt for licensed content that does not infringe on copyrights. If you can’t find the movie you want On-Demand or on your streaming services, don’t give in to the illegal download temptation. You should be able to rent it from platforms like Amazon Prime Video. Or you can always look for a DVD release. But in your quest to catch these underrated movies 2021 don’t harm the filmmakers that give us these gems. So, always pay for the content you watch.