How to Watch Disney+ Movies in IMAX Resolution? 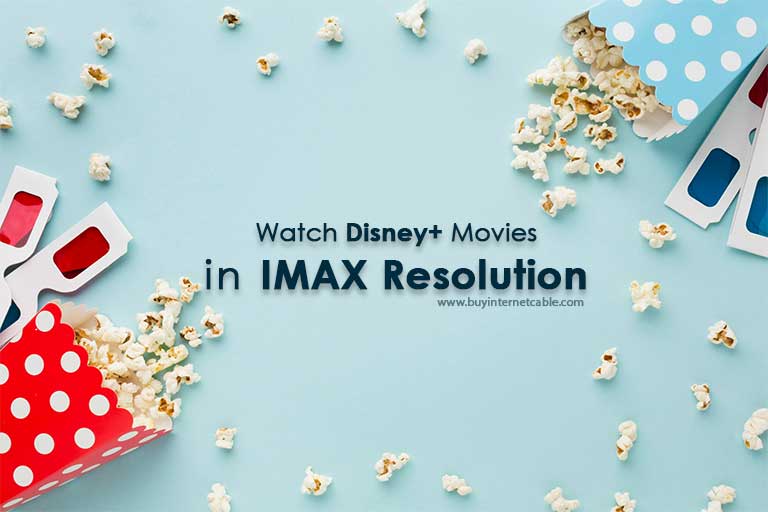 There was a time IMAX resolution was confined to movie theaters only. Now, it has made it to our homes all thanks to streaming services like Disney+. It’s possible to expand the resolution up to 1.90:1 resolution and stream in superior quality without spending money on a movie ticket.

Excited to watch Disney+ movies in IMAX resolution? Here’s all you need to know to immerse yourself in this experience.

How to Watch Disney+ in IMAX Quality?

Some Disney+ movies are now available in an increased aspect ratio of 1.90:1, which is a feature called IMAX Enhanced. As a result, you’ll be able to see up to 26 percent more of the original image on your internet without cable!

However, this does not imply that the movie will be available in that expanded ratio throughout. Only a few sequences will be shot in IMAX.

How to Enable This Function?

You don’t really have to fiddle the settings to enable this function. If a movie supports IMAX resolution, it will be labeled as such. Remember that you can’t watch all Disney+ movies in IMAX enhanced. Only a few movies support this resolution.

Let’s say you a movie that you have decided to want support IMAX enhanced. Simply pay it in IMAX enhanced and that’s it. The content is set to play at an enlarged resolution by default.

Navigate to the Versions tab if you’d like to watch in regular widescreen resolution. There are two options here: IMAX Enhanced and Widescreen. The content of these versions is identical; the only difference is the resolution. If you love watching HD channels on Spectrum cable, you are going to love the IMAX resolution even more!

You can watch Disney+ movies in IMAX Enhanced on any device that supports this streaming platform. In other words, the content in enhanced resolution is available to watch on your computer, smartphone, and smart TV.

If you are a marvel fan, you will be thrilled to learn that all Marvel movies are available in IMAX enhanced. To save you the hassle, here’s a list of all the must-watch Disney+ movies in IMAX resolution:

What Do You Get in IMAX Enhanced?

IMAX’s expanded aspect ratio means that “more of the action is visible on screen, just as the directors intended” during specific scenes in the film. The said graphics display the extended image as it will appear on Disney Plus (with the blue lines reflecting the Imax enhancement).

Disney Plus’ relationship with Imax is going to benefit the audience. It’s going to deliver significant audio and visual advancements in the future, including immersive DTS Imax trademark sound. Bringing the IMAX technology to subscribers with IMAX Enhanced view in the Disney plus app would be a whole new experience for the audience.

Is It Available on Any Other Streaming Service?

Turn’s out IMAX and Disney’s relationship isn’t exclusive. The success of this expanded ratio to watch Disney+ content in superior quality could encourage other streaming services to implement this feature on their platforms as well. According to a Disney executive, there are no immediate plans to offer the Imax feature on future Disney+ films or across the company’s other streaming services like Hulu and Star, but the company will monitor social media and user behavior to gauge the success of the rollout. Who knows in the future this feature is available on Spectrum cable too!

Wouldn’t the ability to watch Disney+ Movies in IMAX resolution discourage people from visiting movie theaters? Experts have thought this through before rolling out this feature. No matter how good your TV is, the experience on Disney+ won’t be as good as it’s in a real movie theater. It’s will be different than what you get in an actual IMAX theater, so don’t expect any big changes in the behavior of entertainment lovers. In fact, the executives at Disney Plus believe that it will help them educate their audience about the differences in IMAX and why they should buy a ticket to an IMAX movie.

Which Devices Does It Support?

On which devices can you watch Disney+ movies mentioned above in IMAX quality? Currently, IMAX enhanced certified gadgets are available in Japan, the USA, China, and Europe. Hence, only users in these countries can watch the expanded ratio content.

While an IMAX Enhanced-certified device is not required to see IMAX Enhanced content on Disney’s streaming services, IMAX has however identified a subset of TVs, speakers, projectors, and AV receivers that meet the requirement. That means you will be completely optimized and prepared to get the most out of IMAX’s visual and audio technology if you use any of these certified devices.

The IMAX enhanced feature rolled out on 12th November 2021 across all Disney+ services. All you have to do is find the movie and hit the play button. In case you are unable to play the movie in this feature, despite meeting all eligibility requirements, you might have run into a technical error. Like you call support to get help regarding Spectrum cable box error codes and other issues, contact Disney’s support for assistance.