How to Watch NFL Games for Free? 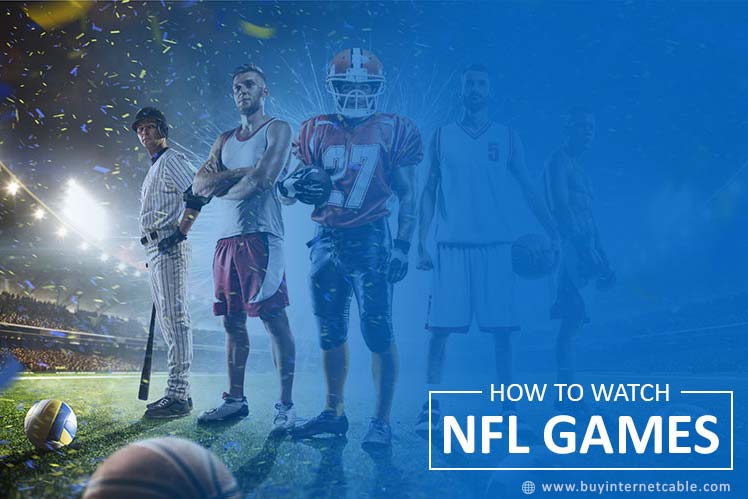 It’s no secret that cable cutters are on a rise. But leagues like NFL are hard to miss as they have a massive following. You can stream and watch the league online and there are a good number of ways to do so. In this guide, we will cover the legal ways of streaming NFL games online without having to tune in to NFL Network on your cable.

If you have a subscription to Hulu Live TV, it is perhaps the best way to watch NFL without cable. You can access ESPN, ACC Network, NBC, local Fox, and CBS in most areas. You can watch the following NFL games on Hulu Live TV:

The only channel that is missing here is NFL Network. But you can watch most of its content on Hulu and miss out on only a few. You can have a 1-week free trial and see for yourself if you like it covers enough of NFL game events.

Just like Hulu, YouTube also doesn’t air the NFL network. It airs select NFL content from local CBS, NBC, and ESPN. It will air Sunday day games and Monday Night Football of local teams aired on CBS, NBCSN, and Fox. You can also catch Thursday Night Games aired on Fox. Again, you will only miss the content that is exclusively aired on NFL Network.

One great option to watch NFL online is PlayStation Vue. If you are one of those people who think you essentially need a PlayStation game console to be able to use Vue, then let us enlighten you, that’s not the case. PlayStation Vue is available on Chromecast, Amazon Fire TV, Roku, and so on. With an affordable subscription fee, you get to watch content from your favorite sports channels such as:

However, live local sports channels are not available. You can watch all that the aforementioned services offer along with the select content of the NFL Network.

You can live stream Thursday Night Football. It is available to be streamed globally for the 2019 NFL season 2019. With the Amazon Prime service, you can catch all the Thursday Night Football sessions via Fox broadcast. NFL Network will also simulcast them and then it will be aired in Spanish on the Fox Desportes channel.

According to an estimate, more than 100 million users of Amazon Prime across the globe will be able to watch Thursday Night Football games. Users will be able to watch it in more than 200 countries. they can watch them with the Amazon Prime app for TV and game consoles. They can also access them via other connected devices such as mobile devices, Amazon Fire TV, and online.

Do you happen to be one of Verizon’s customers? Or, are you considering switching your wireless provider? If yes, you may get a chance to have the cheapest option to watch NFL games. With NFL mobile app, every Verizon customer can stream every NFL game for free. Literally, no cost at all. Free NFL for all the Verizon customers. Yes, that’s right!

The only catch is that it is available on your Charter mobile devices only. You won’t be able to stream them on your TV. If you are more concerned about watching NFL free, without having to subscribe to any pricey  TV packages, this should be no biggie!

It might sound a little old school, but if you are a fan of some local team, this is the most convenient way is to watch it. Those bunny ears still work and if you are a crazy NFL fan, you will work it out. You can go for a sleeker and newer model and buy it. Go for the one that matches your needs. It will work better and will ensure better picture quality and broadcast. Just make sure that you skim through some online guides before you make a purchase.

Most of the aforementioned solutions are for single viewers. Especially those, which can only work on mobile devices. If you are a big family of NFL geeks, we would suggest getting a subscription to a traditional cable TV package. Because if you ask for a fair opinion, none of the aforementioned replacements give you the kind of experience that cable TV does. If the budget is a problem, you can look up affordable cable TV packages online. When I was living with my 5 friends in an apartment, we had subscribed to a Spectrum Triple Play package. And since we were all crazy football lovers, we loved it. We shared the expenses and it was a cheaper deal.

How to watch NFL games without cable?

Many online forums, sites, and apps offer streaming NFL games. Some of them are Hulu, PlayStation Vue, Amazon Prime Video, and so on.

Can I watch the NFL on Amazon Prime?

Yes, you can stream and watch NFL games on Amazon Prime. Users across the globe use it to watch the NFL.

Can I watch NFL games on Hulu?

Yes, with a Hulu subscription, you can catch NFL games.

How much does NFL Game Pass Cost?

The price of the NFL Game Pass is only $99.99 per season. And that’s an annual subscription. It is much cheaper than most cable TV plans.

Can I stream the NFL Playoffs?

Yes, you can easily stream NFL playoffs on your mobile devices and systems. It’s free of cost.

Many streaming services offer NFL coverage. Some air select games. Some names of these services are Hulu, Amazon Prime Video, PlayStation Vue, Sling TV, and so on.

What devices can I use to watch NFL games?

You can watch it on multiple devices, including TV, computers, iOS, and Android-based smartphones and tablets, Apple TV, Amazon Fire TV, Roku, Chromecast, game consoles of PlayStation and Xbox.
Disclaimer: Although all requisite efforts have been made to procure owner/publisher approval for the images used in BuyInternetCable.com Blog posts, we apologize (in advance) for any unintended and/or uninformed copyright violations still incurred therein. If you feel that your material has been used without your tacit consent, please feel free to correspond with us through Contact Us page.
error: Content is protected !!