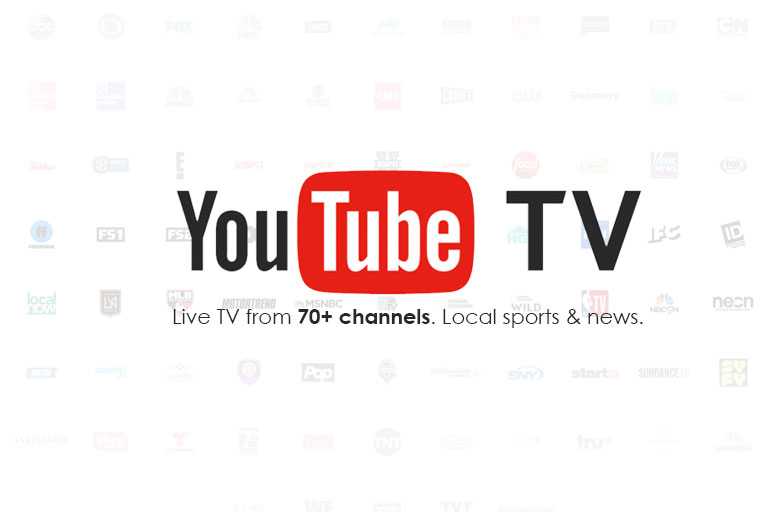 You can get access to almost all your favorite pay-TV networks on YouTube TV. From local and international channels to prominent broadcast networks, the subscribers will get access to all.

The YouTube TV lineup includes all the channels mentioned in the following table:

Some of the channels mentioned in the table are professional sports and college networks. This implies that they will only be available regionally. Although YouTube TV is doing great and has garnered a lot of local support, prominent channels like ABC, The CW, NBC, and others might not be available for live streaming in your market.

The following section will discuss the packages and add-ons that you can opt for after paying an additional cost. However, if you still do not find your favorite channel in any of the lists, you can suggest the YouTube TV team on their channel request form. And they will try to cater to your request.

The base YouTube TV package comes at a price of $49.99.  However, subscribers get an option to opt for any of the add-on packages that they please. The options also include sports channels that the sports fanatics can subscribe to after paying an extra amount of money for that.

You can select from the following options:

Having looked at the package, add-ons and their costs, the question now arises that what new does YouTube TV offer? In the summers of 2019, YouTube TV made changes to its ‘Now Playing’ section. The new interface for this section meant that the adjustments now came with larger than before image thumbnails.

Apart from that, YouTube TV also introduced a progressive and a fast-forward section labeled ‘More to watch’. This section became an instant hit among the subscribers as it recommended related content to the viewers. The suggestions meant that viewers now had access to a larger library of shows and movies in the genre that they relished watching.

As mentioned earlier in the blog, YouTube TV is compatible with a huge variety of TV sets and streaming devices. The Smart TV companies that support YouTube TV include select LG models, Sharp, Sony Smart TVs, Vizio, Hisense, and Samsung.

Digging a little deeper into the matter, let’s discuss all the devices that YouTube TV is compatible with. To begin with, you can watch YouTube TV via Xbox One consoles and Chromecast. Apart from that, you can also relish watching YouTube TV on desktops, iOS, laptops, and Android.

However, one of the major issues that YouTube TV faced was its limited support for streaming devices. But subscribers do not have to worry about this issue as well. Because YouTube TV app landed on Roku, Ultra, Apple TV boxes,  stick and Express in 2018. Hence, ticking off another worry from the subscribers’ list. Apart from that, YouTube TV is also available on Amazon Fire TV devices.

One of the most amazing features that YouTube TV offers is the live streams of the cable channels included in the packages. This feature works in accordance with a person’s location. For example, someone residing in New York will get access to ABC 7, NBC 4 and FOX 5. But he will not be able to watch PBS. You will have to visit YouTube TV’s Home tab to have access to all the live TV streaming options. The app will also suggest the top picks according to your taste and preference.

As far as the sports networks that YouTube TV offers are concerned, then you get access to the following:

DVR Shows and the Allowed Limit

The best part? You do not have a storage cap. This means that you can record as many hours of shows as you please. But keep in mind that each recorded show will vanish from your DVR library after nine months. That’s the only limit you should worry about.

YouTube Red is another paid service that YouTube offers. You can strip off all the ads from the videos that you are streaming using this service. Apart from that, for an amount of $9.99/month, YouTube Red also allows subscribers to download videos offline. They can then watch those videos later.  Not only this but subscribing to YouTube Red also gives you access to Google Play Music.

YouTube TV has an edge when it comes to ‘no cap’ policy for DVR recordings. Apart from that, the clean and easy to use interface also attract the people towards this service. However, YouTube TV is more expensive than other services because of the add-ons that it offers. Sling TV and PlayStation Vue, both come at a cheaper cost than YouTube TV. The only service that costs as much as YouTube TV is DirecTV Now but it offers fewer channels (40) than YouTube TV as well.

What is YouTube TV, and how does it work?

It is an online streaming service that you can access through subscription.

How much does YouTube TV cost, and is there a contract?

How many can stream at once?

3 people can stream at once on their devices.

Can I get YouTube TV on my smart TV?

Yes, if you have a smart TV from companies including Samsung, Vizio, Sony, LG, Hisense, and Sharp.

How can I DVR shows, and how many can I store?

Click the ‘+’ button on the home page to store unlimited hours of shows and movies.

How do I get a free trial of YouTube TV?

YouTube Red is a paid service that eliminates the ads from videos.