Is the Internet a Blessing or a Curse for Society?

Home » Blog » Technology » Is the Internet a Blessing or a Curse for Society? 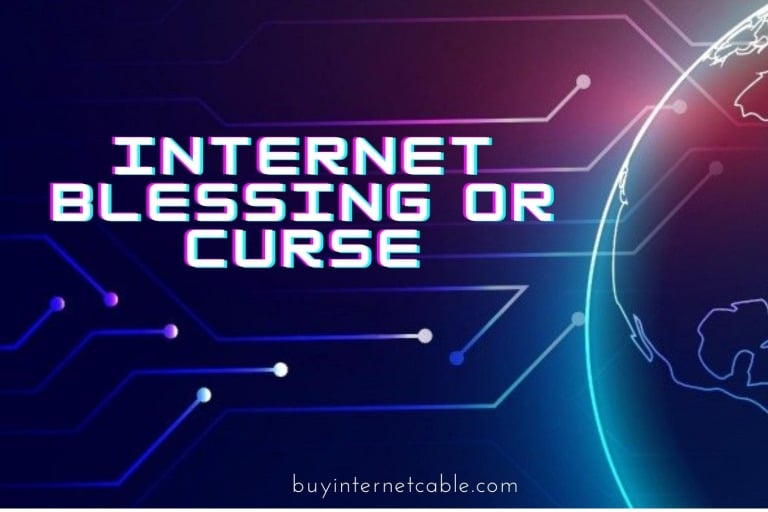 Posted on March 31, 2022 by Kyle Lawrence
Is the internet good or bad? There is no exclusive answer to questions as absolute as this. Almost everything has a flipside. For example, guns help people protect themselves and their families from criminal activities. But on the other hand, people committing crimes often do so using guns. Of course, statements on people and not guns being responsible for violent crime are always up for debate. But there is no denying the impact of things like guns or the internet depends heavily on how a person uses it.

Advantages and Disadvantages of The Internet

So, is the internet a blessing or a curse for modern society? Maybe both. Even the staunchest digital citizens can’t deny both sides of the internet. Service providers these days cover much larger service areas than ever. That puts services like the Spectrum Gold package squarely within reach of a much larger demographic. Therefore, the number of active internet users only continues to grow. This adds complex layers to the discussion. However, you can make up your mind about the internet, taking into account the following:

The biggest and most significant impact the internet has had on our society is the ability to share information and data faster than any other communication medium. Today, the internet is the primary medium supporting social, personal, professional, and even romantic communication. In the pre-internet age, a college student would have to spend hours in a university library just looking for the right research material.

Today, the student can access the same information much faster, and may not even have to be on-campus to do so. Similarly, businesses use emails and digital platforms for communication between stakeholders. Moreover, the benefits of fiber internet and other high-speed services mean everyone has access to much faster speeds. This allows for things like video calls, video conferences, podcasts, virtual meetings, and much more.

As internet acceptance and adoption have grown over the past two decades, it has created entirely new and unprecedented opportunities. The rise of the e-commerce industry is perhaps the most visible example. Amazon is one of the largest e-commerce companies in the world, and also one of the richest. It is also one of the oldest e-commerce platforms, claiming the rights to the first ever recorded online sale. Similarly, influencer culture is another great example of an income option that did not exist before the internet.

But there is a whole range of new roles and business models, from digital marketing professionals to digital outsourcing agencies. The vast use of internet services all over the world also allowed remote working models to emerge. And while everyone may not have access to the same type of benefits of fiber internet that US citizens do, they typically have enough access to carry out remote working roles.

Every Internet User has Space to Voice Opinions

The internet and internet platforms like Twitter, Instagram, and Facebook have played a huge role in giving a powerful voice to social movements. The billions of social media users, news outlets, and even viral sharing have made public opinion far more visible and effective than ever before. Social media pressure and the rise of progressive movements have helped force significant changes. These include a sharply growing rejection of exploitation, abuse, misogyny, and politically incorrect opinions. For celebrities, politicians, and even world leaders, this has been a rude awakening to get their act together of risk being “canceled”.

There are many benefits of fiber internet and other widely available services. But there are also flipsides to everyone having easy access to the web and free internet platforms. Social media and other platforms are often invaded by digital trolls. These individuals seem to want nothing more than to be disruptive and are very good at derailing discussions. More aggressive trolls can also be cyberbullies that target individuals with abuse and even threats.

Of course, to paraphrase Mike Tyson, this may be a case of the internet making people safe enough to voice opinions about a person they probably would not say to the person’s face. Moreover, internet anonymity can make it harder sometimes to track down more serious types of cyberbullies. And while trolls can sometimes be nothing more than a minor annoyance, cyberbullying is just as traumatic as the physical kind.

Trolls and bullies aside, the internet is also home to far more serious types of crimes and criminals. Cybercrime is one of the biggest problems to emerge from the worldwide acceptance of internet services. While most people make use of the internet in the usual legal ways, there are other types of internet users with more malicious intentions. Cybercrime and criminals come in many varied forms. And they can have a range of objectives as well. But they are a very real and ever-present threat, prompting the reactionary rise of the cybersecurity industry. Yet, cybercrime continues to be a big problem for individuals, businesses, and even governments.

One of the biggest reservations internet users have typically involves digital privacy and confidentiality. Most users believe (and rightly so) that the universal right to privacy extends into the digital sphere. Yet nearly every digital interaction is monitored by devices, platforms, services, and even service providers. Moreover, many of these information gatherers share them with third parties. For many people, the idea of being monitored or tracked when online is not a comfortable notion.

This does not, in any way, mean that people are trying to hide illicit digital activity. It is a much more fundamental issue concerning companies like Google and Facebook undermining digital privacy. Allegations of platforms like Facebook sharing data to companies who then use it to manipulate opinions for events like an election only serve to generate more fear among internet users.

The sum total of the internet is too big for a single blog. And since it is still evolving (it is only a few decades old), new areas of how it improves (or damages) our lives keep emerging. The decision will likely be your own. But take into account the following:

Brief Review of the Pros of the Internet

The internet has helped speed up globalization. It allows people to connect instantly over vast distances. It has also given rise to many new industries and roles. The e-commerce industry, influencer culture, and digital marketing firms are all great examples of the internet’s revolutionary impact. It has also removed many limits on modern businesses by bypassing geographical boundaries, creating remote workforces, and helping businesses maintain data and security.  Quick Recap of Cons of the Internet.
However much we love to be online, the internet is not a safe place. Cybercrime and malware attacks are just the most extreme examples. There are also predators and potentially violent stalkers all over the digital landscape. Trolls and cyberbullies make life much harder for everyone. And nobody can predict when they will strike. All you can do is be more mindful of your digital habits and keep a skeptical but healthy attitude towards digital interactions.
Disclaimer: Although all requisite efforts have been made to procure owner/publisher approval for the images used in BuyInternetCable.com Blog posts, we apologize (in advance) for any unintended and/or uninformed copyright violations still incurred therein. If you feel that your material has been used without your tacit consent, please feel free to correspond with us through Contact Us page.
error: Content is protected !!